ABOUT: Canberra has a unique place as one of the few planned Federal capitals around the world.

This IGPA Public Lecture addresses the question whether the aspiration at the time of Federation that Australia have a planned national capital that reflects the highest ideals of social comfort, city building, urban design and public administration has been realized. The event is jointly convened by Professorial Fellow Jon Stanhope AO and Adjunct Professor Dr Khalid Ahmed PSM.

Tony Powell AO is an authority on planning in Canberra. He holds a Bachelor of Engineering and Master of Town and Country Planning from the University of Sydney.  Tony has had a varied and distinguished career as an engineer in the public and private sectors; as a planner in a local council, the State Planning Authority of NSW, in private practice; and as a senior public servant in the NSW and Federal governments. He was the Chairman and CEO of the Darwin Reconstruction Commission. 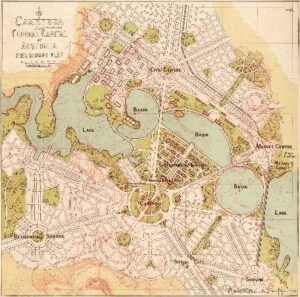 As Commissioner of the National Capital Development Commission between 1974 and 1985, Tony has had a deep and enduring involvement in the development of Canberra as a city and as the nation’s capital. He was awarded an Officer in the Order of Australia in 1985, and is a Life Fellow of the Planning Institute of Australia.

After retirement from professional practice in 2014, Tony has researched, written and lectured on the history and practice of urban and regional planning. He has also remained engaged with the planning issues in Canberra, and has made numerous contributions to parliamentary inquiries, public forums, and print and electronic media.

Tony considers that Federal capitals are always under threat from constituent State capitals, none more so than in the case of Canberra where, unlike Washington, for example, the city does not loom large in the national psyche.

THIS EVENT IS FREE TO ATTEND. PLEASE VISIT EVENTBRITE TO CONFIRM YOUR REGISTRATION.