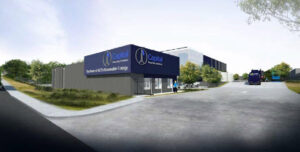 Waste that is currently buried at Mugga Lane tip would be diverted to Fyshwick where up to 25% would be recycled, and the remainder burned with the heat used to generate electricity.  NSW material would also be processed.  The facility would also burn sewage sludge.  This it is claimed would reduce greenhouse gas emissions and the amount of waste buried.

The facility would be only 560m from at the Canberra South Motor Park in north Symondston, and 820m from houses in Narrabundah.   A significant number of dwellings in Narrabundah, Causeway and Kingston Foreshores would be within 2 km

A draft Environmental Impact Statement (EIS) must now be prepared for submission to Environment, Planning and Sustainable Development Directorate (EPSDD).  When this has been lodged EPSDD will seek public comments.

About 270,000 tonnes of waste that currently goes to the Mugga Lane tip every year would be diverted to the Fyshwick facility, where perhaps 70,000 tonnes of recyclable material would be recovered and the remaining 200,000 tonnes burned.  It is proposed that a further 150,000 tonnes of waste per year be imported from NSW.  The plant would also incinerate sewerage sludge produced by sewerage treatment works operated by Icon Water and Queanbeyan-Palerang Regional Council.

Heat from the plant would be used to generate about 20MW of electricity, about 6% of ACT electricity consumption.  The proponent claims that the facility would reduce landfill volumes (at the Mugga Lane tip in the ACT and at other sites for any NSW waste) by 90% and by incinerating the waste that cannot be recycled significantly reduce greenhouse gas emissions compared with burying this material in landfill where it would slowly decompose.

The proponent must now prepare a draft Environmental Impact Statement (EIS) for submission to Environment, Planning and Sustainable Development Directorate (EPSDD).  When this has been lodged EPSDD will seek public comments.

The ISCCC, together with some of its constituent residents’ groups, is organising an information meeting at 7pm on 23 August at the Harmonie German Club to provide the community with an opportunity to hear the proponent outline the proposal, and to question the proponent.

As well as reducing the amount of waste that is buried at landfills, reducing methane emissions, and recovering some of the energy in the waste through using the heat of combustion to generate electricity, the proponent claims the following associated benefits for the facility:

A brochure produced by CRS is here (CRS_BROCHURE Final.pdf)

The CRS Scoping Application is at http://www.canberratimes.com.au/cqstatic/gxfp8u/CapitalRecyclingSolutions.pdf

A similar facility has been proposed for western Sydney but has not yet received EPA approval.  See http://www.blacktown.nsw.gov.au/News_and_Events/News/2017/March/Opinion_Against_Energy_from_Waste

Incinerating the garbage that is currently buried as land fill (at the Mugga Lane tip in the ACT and at other sites for any NSW waste), would undoubtedly dramatically reduce the tonnage and even more the volume of material that is to be buried.  Whether incineration of this material (to produce CO2 and H2O) would produce less overall greenhouse gas warming compared with burying the material, where it will slowly decompose releasing methane (which is converted to CO2 within about 10 years) over a long period, is a matter for expert advice.

The suggestion that the potential delivery of waste by rail to the facility would reduce road traffic seems to be unlikely.  ACT waste material will continue to be delivered by truck with the destination changed from Mugga Lane tip to Fyshwick, so any increase in rail traffic will only eventuate if suppliers of NSW waste choose to deliver it this way.  To the extent that NSW sourced waste material is delivered by truck road traffic will increase.

What are the minimum and maximum estimates of truck movements to service the facility, including monthly deliveries and removal of ash and recyclables, assuming no material is delivered or removed by rail?

Does the ACT Environmental Protection Agency have the necessary statutory independence, authority, powers, knowledges and resources to adequately monitor the facilities for odour, smoke, dust, noise, particulates, greenhouse gases, other gases (eg H2S, SO2, NOx), arsenic, chromium, mercury, and other heavy metals, toxic and acid residues in the ash, and compliance with all other agreed performance criteria?  Can it provide adequate and reliable baseline data so that we can know how the waste facility has added to these pollutants?

Will the EPA have the power to shut down the facility if it thinks that any one of the agreed emission standards for the facility is breached?

What monitoring will be in place to monitor longer term impacts on the population (something along the lines of the Government’s longitudinal study of residents in Mr Fluffy houses might be desirable)?

For those who would like to do their own reading on the subject we attach a glossary, as not all articles explain what these acronyms mean.

Below is a list of questions which we believe should be answered before the proposal can proceed.